REV3 Anderson.. A half rev breakthrough.

I generally don't post race reports. Well for that matter I generally don't post much at all. I am working on rectifying this for several reasons, first I have a new business I'm trying to get started (www.hdcoaching.net), secondly I believe I have some useful information and experience to share and lastly I have a few new sponsors that I need to keep happy.

And now the report...

Some things do go as planned...A half rev breakthrough.

I had pegged the Rev3 Half Rev in Anderson, SC from the beginning of the year for many reasons. It was close by, it was exactly 4 weeks out from the ITU Long Course World Championships, it was said to be a challenging course and everything thing I'd heard about REV3 (www.REV3tri.com) was nothing but effusive positivity. It would be a excellent opportunity to get a "gut check" race in as well as a final test of my nutrition schedule for worlds.

Going into the race I purposely did not do much of a taper. According to all the metrics I follow in Training Peaks my rested state should fall right on race day but be in the negative for most of the week before. Also I wanted to go straight back to training once it was all said and done to put the finishing touches on my form for worlds.

My biggest fan, Jenn and I loaded up the car and prepared for the hour and half drive down to Anderson, SC. It was definitely nice to not have to travel far to get to the race site. We arrived and were greeted with a massive race site that was hauled in on two tractor trailers. They are definitely family friendly with a huge kid zone with a bounce house and slide, in short these guys are pros at what they do.

Check in was painless. Actually it was better than painless when the girl checking me in (she was the same age as me) thought I was one of the collegiate competitors. Heck, at that point no matter how the race went it was already a good weekend!

We then jumped back in car and went to the first transition area at Lake Hartwell. I dropped off the bike, checked out the swim course, then got back in the car to drive part of the bike course. The bike course was hilly and technical with lots of turns. It was clear it was not going to be a fast bike. We then went back to the venue for a little 2 mile shake out run and we were done.

I almost forgot, there was a "celebrity" siting there as well. Ryan Sutter of bachelorette fame was there with camera crews and a team of scientist from gatorade. I made it my mission to beat him at all costs.

I am not a morning person and no matter how many times I've been up at this hour to go swim it still sucks. As I was eating my Koala Krisps and sucking down as much liquid calories as possible, Jenn popped out to go get coffee. She definitely deserves a medal of honor for finding an open Quickie Mart with decent coffee.

We got out the door, set up run transition, and then headed back over to bike transition. It was dark and we took a wrong turn. Luckily, other than me internally freaking out while trying to remain outwardly calm, it was a non issue.

I saw one of my old bike racing buddies, Chris "G-man" Giordinelli, before the start. He is one of the best AG triathletes in the Southeast. I told him to say hi as he went by on the run.. 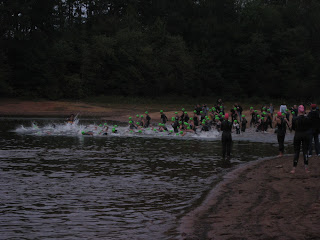 Me and a hundred of my other rubber clad compadres piled into the water as if our life depended on it. A couple of dolphin dives and then we were swimming. The first turn buoy came quickly as we all took turns clubbing each other in the head and swimming over or under those who forgot the race doesn't end at the first turn.

I settled into my own rhythm and lost the pack doing so. The water was a bit choppy from the all the wind and I never found any feet to draft off of. Coming into the last turn buoy I kicked hard going around and then  BAM, cramps in both calves. The last 200 meters or so were about just getting into shore. I'm sure I lost a ton of time there. 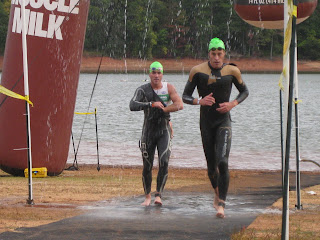 Getting out was another challenge as there were sharp rocks and mud and sand. These things would come back to haunt me a bit later.

I saw Jenn sitting at the exit and cheering me on. That always helps the motivation.

I stripped out of my wetsuit quickly and then struggled to put it in the bag they provided. The only complaint I have on the whole weekend, organizers, a wetsuit that fits someone my size does not go into a tiny plastic bag very well!

It was time to go to work. It was hilly and windy, with 12-15mph winds. The hilly part wasn't so bad the windy part was a different story.  There were a lot of turns which I railed full speed and I'm sure made up a ton of time. Overall it was a fun and fair course.

Jenn and my friend Ryan were following along electronically at the venue. Apparently I went into the lead pretty early on on the bike course. I had no way of knowing this so I just kept the hammer down.

Remember that mud and sand I mentioned in the swim? I could feel it sandpapering the tops of my toes for 56 miles. I knew I wasn't going to have pretty feet going onto the run.

I slid my bike to a halt and did a full on cyclocross step through dismount. I think one of the volunteers needed to change their pants afterwards. The rest standing there were just impressed (well that's how it played out in my head).

I had made special note of my transition spot and wasted no time finding it. I racked my bike and went about putting my shoes on. Bloody toes... awesome. Transition went like this, Socks on, shoes on, hat, no, gel, no, number belt, garmin now get the heck out. I heard Jenn yelling but for the life of me I couldn't find her. 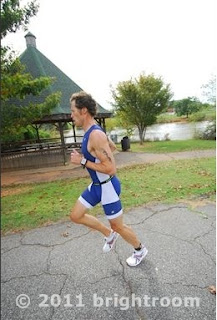 On the run course I was clicking off 6:30-40 miles for the first almost two miles. I was trying to force myself to slow down. I was optimistically hoping to run a 1:35. A time I've never ever run before.

I settled into a rhythm and just focused on the job at hand. The course was rolling but not what I would call hilly (700ft elevation gain). It was pretty and we wound our way around a couple of parks and then through downtown and then back.

The aid stations we numerous and very well stocked. One was especially well stocked. A local college's women's volleyball team had come out and dressed in Halloween "costumes".  Most of the costumes consisted of as little fabric as possible to convey the actual character, ie. traffic cop, genie, mermaid.. We passed through that one three times. I'm sure that was planned. I told you REV3 were pros!

I alternated between coke/water and gatorade. I have never felt that strong on a run. On the way back in from town G-man was still heading out. The shout "When did you learn to run?" was truly one of the highlights of my day.

With about 4 miles I could start to feel the effort. But at that point you are more or less home. I just ran as hard as my legs would take me. G-man passed me with about a mile to go. He apparently went deep to catch me and was rewarded for his effort. The person to closest guess their time won a bike rack system from Yakima. He finished within one second of his guessed time.

As I was coming down the finish shoot I was catching a woman who had done the shorter race. I eased up so I wouldn't mess up her finish photo. I went straight through the finish and was thrilled with my performance. I found Jenn, finally, and she informed me that I had won! I couldn't believe it. I was hoping for an age group top 5, and as it turned out I was 7th Overall. I think I'm ready for Worlds. 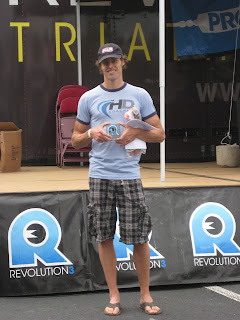 For all my efforts I received a nice glass trophy, a free pair of shoes, a magazine subscription, a $20 gift certificate and a fuel belt. REV3 really takes care of their participants. Next stop Sin City and the ITU Long Course World Championships.


SEE YOU IN VEGAS!