So you say you wanna Hoka? Initial impressions of some big shoes..

What are these Hoka's you say? They are shoes, running shoes actually. But they look like and feel like nothing you've probably ever worn before.

I have been wanting to try out a pair of these shoes for some time. A good friend of mine, former pro triathlete and super stud duathlete, Jay Curwen recently reviewed the shoes in Blue Ridge Outdoors magazine. I wanted to talk to him about the shoes, and as luck would have it he had just started repping them after his article came out. He offered to put me in a pair for some feedback. I obviously jumped at the opportunity, and so here we are.

The full name is Hoka One One (HO-ka O-nay O-nay). It is Maori (native Polynesian New Zealanders' language) for fly over earth, hence the brand tag, Time to Fly. The particular model I'm using is the Bondi-B (Bond-Eye) named after Bondi Beach in Australia. To make things more complicated, one of the founders of the company is French and is a mountain runner.

Suffice it to say the name is and probably always will be pronounced wrong, and no one will really know where they came from. This is not a problem for the company as long as people are buying them, and they are. If you find a pair in your local running store they will be full price, and if they have your size you better buy them since the demand is currently outstripping production.

Now on to the shoes themselves. At first glance they look big. Actually, at every glance after the first they look big. To be honest, even though I had done a lot of research on them, I was still surprised at the look of them. I don't mind flashy attention grabbing shoes at all, but these would probably only generate more looks if they were actually on fire. The ones I have are the black colorway, I can only imagine what would happen if they were the bright neon soled ones.

If you are self-conscious or have a burning desire to match you running attire you may want to skip over these. Actually, if you fall into the above category, you should probably just stop reading since this article will not be geared towards you.

The idea behind the low ramp/drop shoes is that it puts your foot in a more natural position and allows you to run the way nature intended. I'm not sure how much I truly buy into the whole natural running movement, but to me a low drop shoes feels better and faster. I however, know plenty of fast people, and have friends that have no issues running circles around me in a traditional shoe. I say this so that you know where I am coming from in my preferences.

I will say that even though these have a minimal drop, they are not minimal shoes. They have about 250% more blown EVA foam in the sole than a typical shoe. This is what makes them truly unique.

My initial try on of the shoe at Jay's house showed that, for me, they run about a half size small. This is pretty consistent with what I've read. I wear an 11 in Saucony and a 11.5 Hoka.

The out of the box feel is kind of crazy. They don't really feel so much like running shoes as they do supportive cushions for your feet. It is about like walking on newly laid down plush carpet with a thick padding underneath. They feel great.

What I was surprised about was that while they look huge, they don't feel huge. I was kind of expecting some sort of awkward Gene Simmons KISS boots moment, but instead I got, well, normal. When looking straight down on them they look fairly normal as well. They aren't heavy either. Even with all that foam, they were still in the weight range of a typical lightweight trainer.

Because the soles are so thick they are rockered (Click Here for Tech Info) to make up for the lack of normal flex. The soles are also wide. There is no supportive devices incorporated into the shoes, but the shoes are inherently stable just by design.

After my first couple of runs in them, I have to say, I was a bit less than enamored. As I said, I run in the Kinvara which are super flexy shoes with very little support. The lack of flex in the Hokas have taken some getting used too.

After about 50 miles in the shoes they've broken in and I feel much more comfortable running in them. I think I run a little differently in these shoes than I do normally. It is hard to pin down, but switching back and forth between shoes has not been a problem.

The shoes really shine in two places, downhills and on the trails. This is not terribly surprising ,as that is what they were originally designed for. My driveway is a tenth mile 25% grade ramp. Generally I walk down to the road before starting my run.  With the Hoka's, I just run down the hill. The jarring of the typical downhill is reduced to floating.

On the trails these shoes are ridiculous. I've been running in an INNOV8 f195. It is again another super flexible and light shoe. It is fast and free except that you really have to pick your lines on the rooty, rocky Mountains to Sea trail that I run on. With the Hoka', it is like strapping all wheel drive to your feet. You just go, rocks and roots be damned. The shoes just completely eat up everything in their path. For trail running, I think my Innov8's are retired.

I recently did a longish run in my Kinvaras. I hadn't run much in them since I got the Hoka's. I used to think the Kinvara's were cushy marshmallow shoes. The Hoka's made them feel like racing flats. I'm kind of afraid to see what my racing flats are going to feel like.

The big "WHY" for me to try these out was the hopeful side benefit of all the cushion. Being a multisport athlete who was a Cat 1 cyclist in a prior life, I'm constantly looking for a way to save my legs. I've come late to running and quite frankly running trashes your legs for the bike. I feel like these have helped ease my pain a little bit. My legs feel a bit fresher after the long runs and the following day's long ride.

Personally I think these are an ideal distance shoe and a really good trainer for multisport athletes. I also think it would be good for someone who may be prone to injuries since they are so cushioned. The inherent stability, but lack of posting, also makes it work for just about any running style.

I'm planning to do a follow-up post to this once I've actually had time to put more than a couple of weeks on them. Overall, I'm pleased with the shoes. They are definitely going to be my general training shoe. They aren't, for me, a very fast feeling shoe. I feel like I can get by with some light tempo in them, but anything much faster, I feel I'm better off in my Kinvaras. If you have any questions, feel free to ask!

Thanks again to Jay Curwen for the shoes and trusting me to write a decent review. 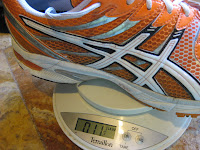 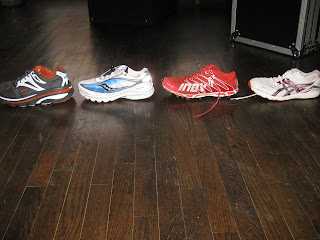